I remember when this place was a Vodka Revolution bar stuck down a grotty side street in Soho whose raison d’être was little more than for the drunken amorous encounters of late night revellers or an apparent double purpose as an emergency loo. Nothing good has ever happened in a Revolution bar. I recall it to be a dark, gloomy cavern offering dubiously flavoured vodkas by the stick. You would frankly have had to have paid me an awful lot of money to be found there. Scratch that, I just wouldn’t. So, one rainy Saturday night I find my phone directing me down a dark alley with a little trepidation. 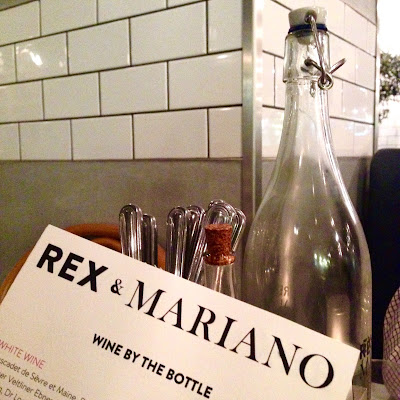 Times change and so does Soho thankfully.
It was therefore an absolute joy to walk into light airy Rex and Mariano and gorge myself on a veritable feast of seafood. Yes, the obligatory industrial elements are there- shiny silver ducts and winding metres of cables snake the ceiling- but I love the unusual stone water fountain in the middle of the floor for washing fishy fingers. I also like the different stations around the outside of the walls providing different focal points. A bar with high stools and wine by the glass, a fresh seafood station shucking oysters and arranging raw prawns plus the open kitchen and preparation areas and grill meaning its a hive of activity even if the tables aren’t packed. 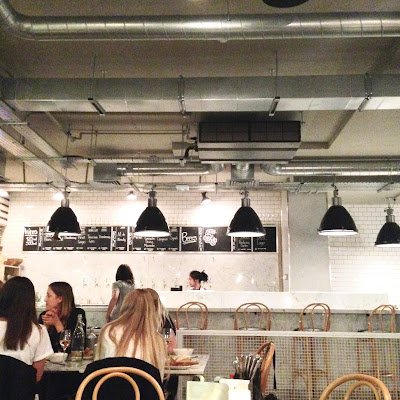 First things first- you need to love seafood. If you don’t you’re down to a choice of chorizo, chips and salad essentially. You also didn’t really do your research before going so more fool you.  To be honest it comes as no surprise that the decor and menu are all polished- Rex & Mariano is the latest offering from the Goodman group. They have got meat so right at Goodman, a hybrid of meat and seafood at Beast and Burger & Lobster so why not seafood alone at R&M?

I broached the iPad ordering system with a narrowing of the eyes and some suspicion but was proven wrong (yes I said it, mark this moment- “I was wrong”). It is very easy to use and completely intuitive. It meant we could order one plate at a time and have a gradual stream of food coming to the table instead of in fixed bursts of starters and mains. You still get plenty of interaction with the staff too as they bring and clear plates and top up wine so its not as robotic and soulless as could be expected. Super efficient and I’d be very happy to see it deployed elsewhere. Loved it. 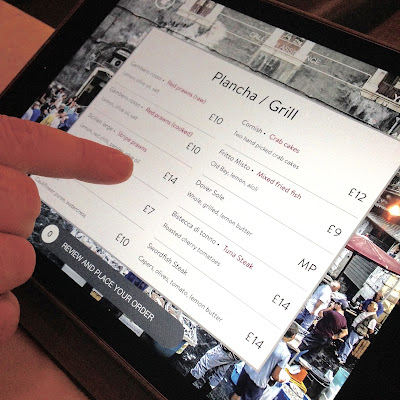 Apparently so far one customer has left in horror but for the most part there have been no incidents where someone has accidentally ordered 20 plates of prawns. The most common problem is that people get eyes bigger than bellies and order too much food all in one go according to our waitress. If you do order too much the iPad warns you to hold fire for a bit.  We pitched in and got button pressing.

First to the table was a salad of burrata and smoked tomatoes. I’ve never been a tomato aficionado and steer clear if I can but smoked tomato drew me in and knocked my socks off. A revelation that I can hoover up a plate of raw tomato with a smile on my face. The slight char to the burrata added depth to the creamy soft cheese. A great start and no seafood yet in sight. 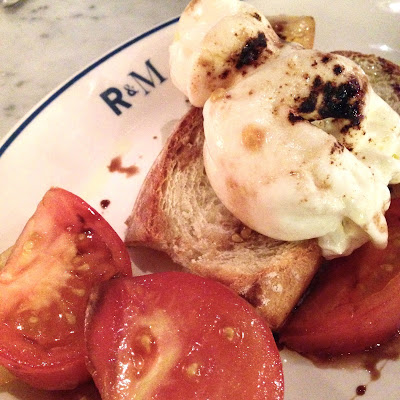 On my second visit this had changed on the menu into a Caprese salad of beef tomatoes, burrata and basil. Although the latter was good it hadn’t got the dimensions in flavour and texture of the smoked tomato/ grilled burrata combination.

Mixed carpaccio of sea bream, salmon and tuna was generous but a little under seasoned for my taste. A pinch of salt and a bigger squeegee of lemon brought it roaring to life. Again on my second visit the menu had been tweaked and the salmon removed. 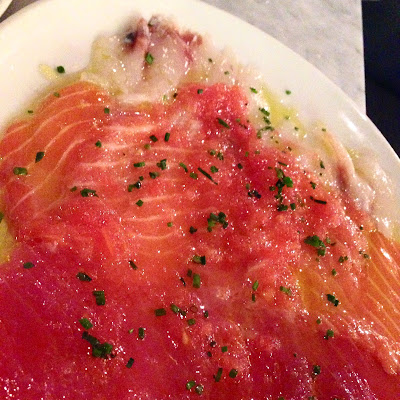 Lobster ceviche with yuzu, coriander and orange was one of the highlights of the meal. It remains as a stalwart of the menu although now without orange (to be honest the yuzu alone was enough) 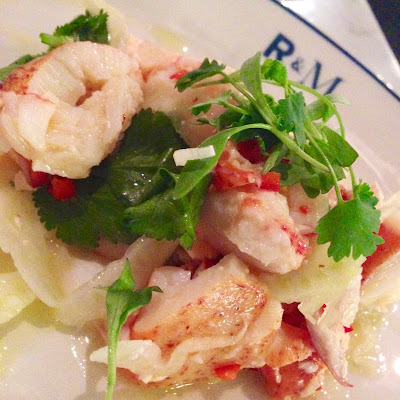 Scallops with cauliflower puree and watercress were perhaps the only let down of the meal. This is doing the meal as a whole a disservice though as there was nothing wrong with the plate- it was just overshadowed by everything else.  The cauliflower puree was essentially noticeable only for its absence. There was a smear of something a little bit white under the scallops but it had no discernable flavour. Whilst the scallops themselves were a good size and the roe flavoursome they would have been better with a little sea salt, some garlic and lemon slung on them. 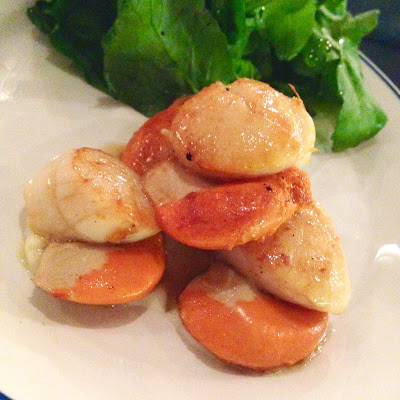 So often when you order crab cakes or fish cakes in a restaurant (or more especially in a pub) what you tend to receive is a potato cake through which you find thin strands of something that once ressembled seafood. not so here. These little babies are so full of crab that I wonder how they managed to bind them together but bind they do. Spring onion and seasoning bring the crab crawling back to life on the plate. Have them with the triple cooked chips which are exceptionally good and fluffy-centred. So good that my mouth still has the burns to prove it – I might have got a bit over enthusiastic. 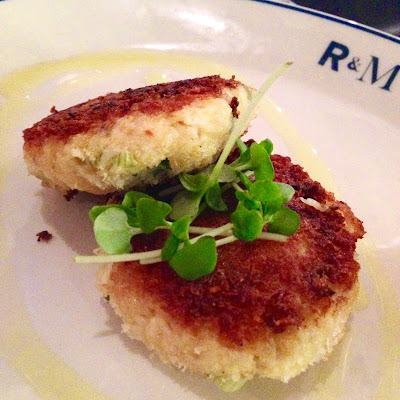 One of the dishes that R&M has become best known for is their Gambero Rosso whisked straight to London from the sun-drenched seas of Italy. These bright red chaps can either come raw or grilled with some lemon. Or both. The cooked ones were firm and zingy with citrus and transported me away from the rains beating down in Soho to the Amalfi coast. Then onto their raw brethren. Despite hearing rave reviews of the raw ones they didn’t rock my world unfortunately. “They taste slimy” was the verdict from the other side of the table. Couldn’t agree more and the slick of olive oil liberally coating them exacerbated this. Yes, they were sweet and juicy but the texture was too much of a deal breaker for us. They didn’t come with lemon but should have done- they needed it. 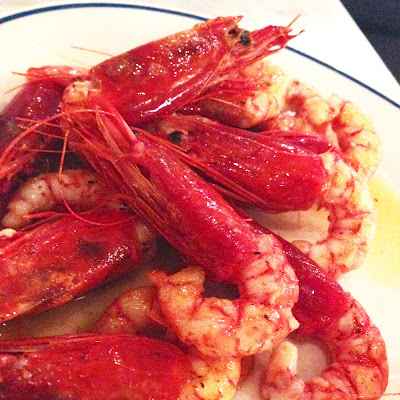 A bottle of the ever reliable Dr Loosens Riesling at £32 was decent value and ideal with so many different types of seafood. Wines are sourced from Bibendum and apparently in some cases directly from vineyards leading to decent price points. This is rather contrary to the spirits though. Ask for a vodka tonic and you’re immediately in for £11. At the more eye watering end of the spectrum for a casual restaurant I reckon.

Highlight The lobster ceviche and the crab cakes. Both utterly delicious.


Would I go again? Without any doubt at all, definitely. A great option for eating truly good and healthy food that still feels like a real treat.