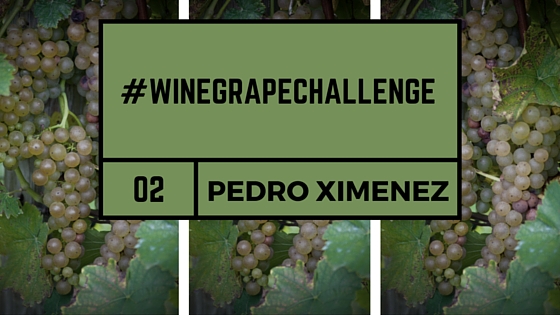 It would be wrong of me not to dedicated my grape post for this week to Pedro Ximenez considering I’ve been exploring the wilds of its home, Andalucia. PX is most commonly known as by far the darkest and most syrupy of dessert wines; often cited as a rare match for chocolate dishes or good mainly for pouring on ice cream (although the latter might be a British thing). This is doubtless delicious but feels like what can be a bit of a waste of a better PX. It is true that many of the cheaper versions of PX served up in the UK are of the throat-itchingly cloying variety- lacking in acidity and essentially like attempting to drink liquidised raisins but a good PX can be a thing of beauty- balanced and mellow. If you are interested in how the sweet versions are made Bodegas Robles have a very good pictorial overview here

What does ‘Wine Grapes’ say?
“Andalucia’s variety used mainly for some of the darkest, stickiest wines made anywhere“. A white berry with lots of synonyms (mainly riffs on the spelling of Ximenez/Ximenes/Jimenez) that has been cultivated in the area since at least the 17th century. The name is reputed to come from either a famous local vintner (Ximenez is a common surname) or from Jimenez near Sanlucar de Barrameda. This is not the story that we were told at Ximenez-Spinola however- more on that in later post.


Large bunches of thick-skinned white grapes with lots of sizes of berry within the bunch are vigorous and mid-ripening. This variety sounds a little frail despite its thick skin being susceptible to botrytis, bunch rot, downy mildew, esca, eutypa dieback and termites – phew, that’s a lot of enemies!


In 2008 Spain declared 9,583 hectares of Pedro Ximenez – the bulk of it being around the Montilla- Moriles DO near Cordoba and east of Jerez. It is used in both fortified and unfortified wines considered high in alcohol and low in acidity.


Some PX is grown in Chile – used mainly for Pisco, Portugal (in the Alentejo) and a little in other areas of Spain. Australia also grows a diminishing amount.

What did I drink? 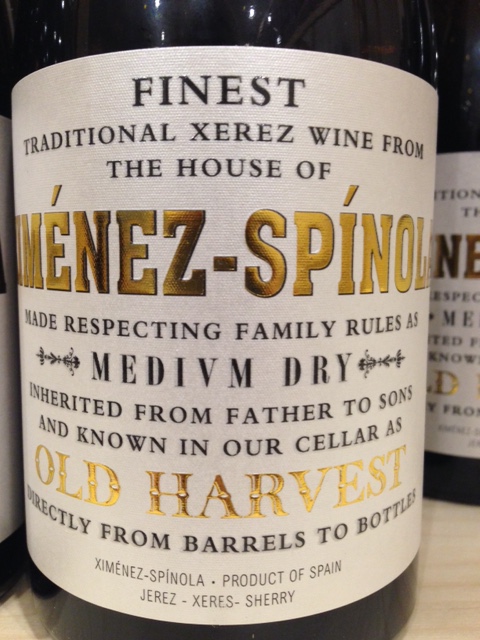 Jerez based winemaker Bodega Ximenex-Spinola is one of the few in the Sherry region that focuses solely on PX (rather than the ubiquitous Palomino which makes up the bulk of sherries).  Their sweet Pedro Ximenez was one of the best that I tried – and that came home with me in my precious suitcase cargo.  I have to confess before visiting I had, quite wrongly, thought that PX is always super sweet. That said they also make a still wine that is off dry to medium sweet and low in alcohol at around 12.5%. Its not sweet enough in my book to constitute a dessert wine (it would be overpowered by anything other than raw fruit) but would make a great aperitif.  It reminds me of a Muscat de Frontignan on the nose – quite floral. More people should be trying this type of wine with PX in my book – I would gladly buy it as an alternative to Gewurtz or Riesling to go with spiced foods. 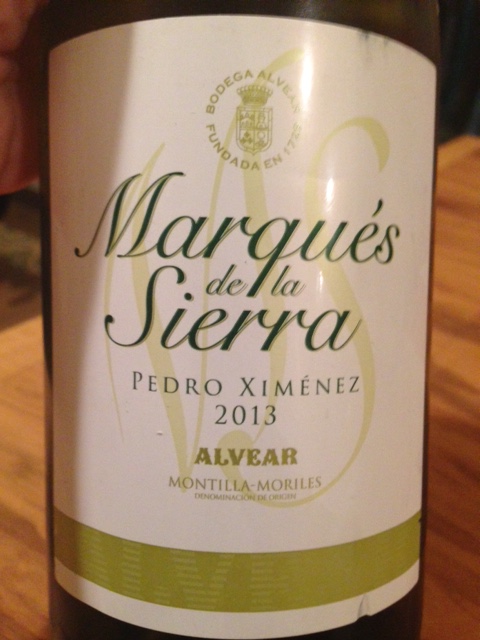 I tried one bone dry Pedro Ximenez white wine, a Marques de la Sierra from Alvear which in all honesty was far from great. Musty on the nose and palate and surprisingly lacking in body with rather green fruit on the palate. If I was being generous I would say that I got a duff bottle. If I wasn’t feeling so generous I might say it was a waste of grapes that could have been laid out in the burning August sun on “passeros” mats before being squished through traditional “capazo” layers to make something sweet. 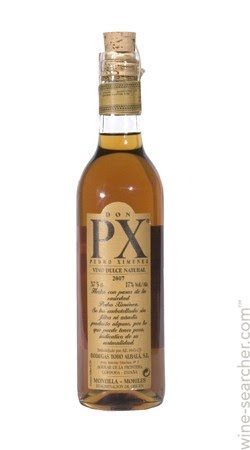 Some of my favourite versions that I found in Andalucia were much lighter and almost the colour of an Amontillado. One of my favourites was the Montilla based Toro Albala’s Don PX 12 year old. The lower viscosity and less powerful sweetness allowed more subtle fruit flavours to come through and an almost blossom-like taste.


Needless to say I also drank a feast of the very sweet versions of PX from all the big names; Lustau, Alvear, Gonzalez Byass. If you happen to be in Cordoba and in desperate need for a wide selection of Pedro Ximenez, then La Casa del Pedro Ximenez is your place (clue is in the name….) They stock a lot of options but are a bit more expensive than the bodegas. They also usually have a few bottles on ice for tasting. Cordoba is the place you are most likely to find a wide variety of PX as it is the nearest big town to Montilla, by the time you get down to Jerez and Seville its more about the Finos and friends and the Palomino grape. 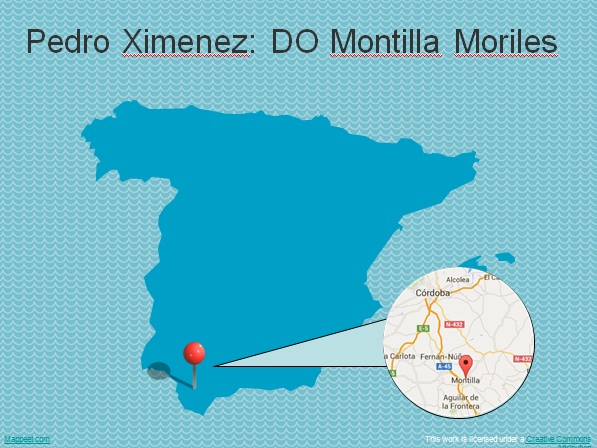 Where can you buy some? 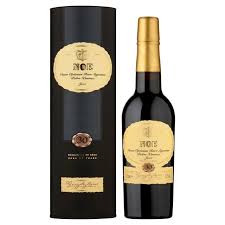 A couple of the Pedro Ximenez
brands that were recommended as being the best by restaurants and sommeliers in
the region were ones that transpired to be readily available and, in some
cases, cheaper in the UK which is something of a turn up for the books.

Noe is
made by Gonzalez Byass and can be found in Waitrose amongst others for around £19/ half bottle.

Pretty much the entire Lustau range including their PX VOS and standard PX can be found from importer AG wines and also many from Berry Brothers. Lustau’s PX is £10.45 for a half bottle. 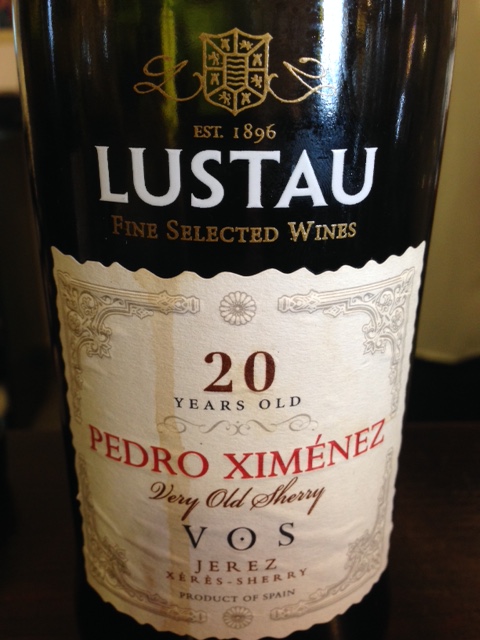 It is possible to buy much more expensive versions; for example Albala are very proud of their 1946 Seleccion Convento having been awarded 100 Parker points. Hedonism are currently offering it at £270 a bottle (although cheaper options are available abroad or by the case).


Even an expensive bottle is arguably a good investment compared to many wines. Due to the high sugar content, once opened it will keep for ages. Good job though; I’d challenge anyone to get through a 75cl bottle in one sitting!

The story behind the wine grape challenge can be found here

Inspiration for these blog posts and the JWGC is taken from the book “Wine Grapes” by Jancis Robinson,  Julia Harding and Dr José Vouillamoz.
You can buy a copy here.