Another year, another January. I began, of course, full of good intentions for the year ahead starting with writing
more often and making sure I do things on my bucket list (commencing with
creating a bucket list). So here we are on the 31st with my first article. What my resolutions most certainly do not include, however, is
drinking less. 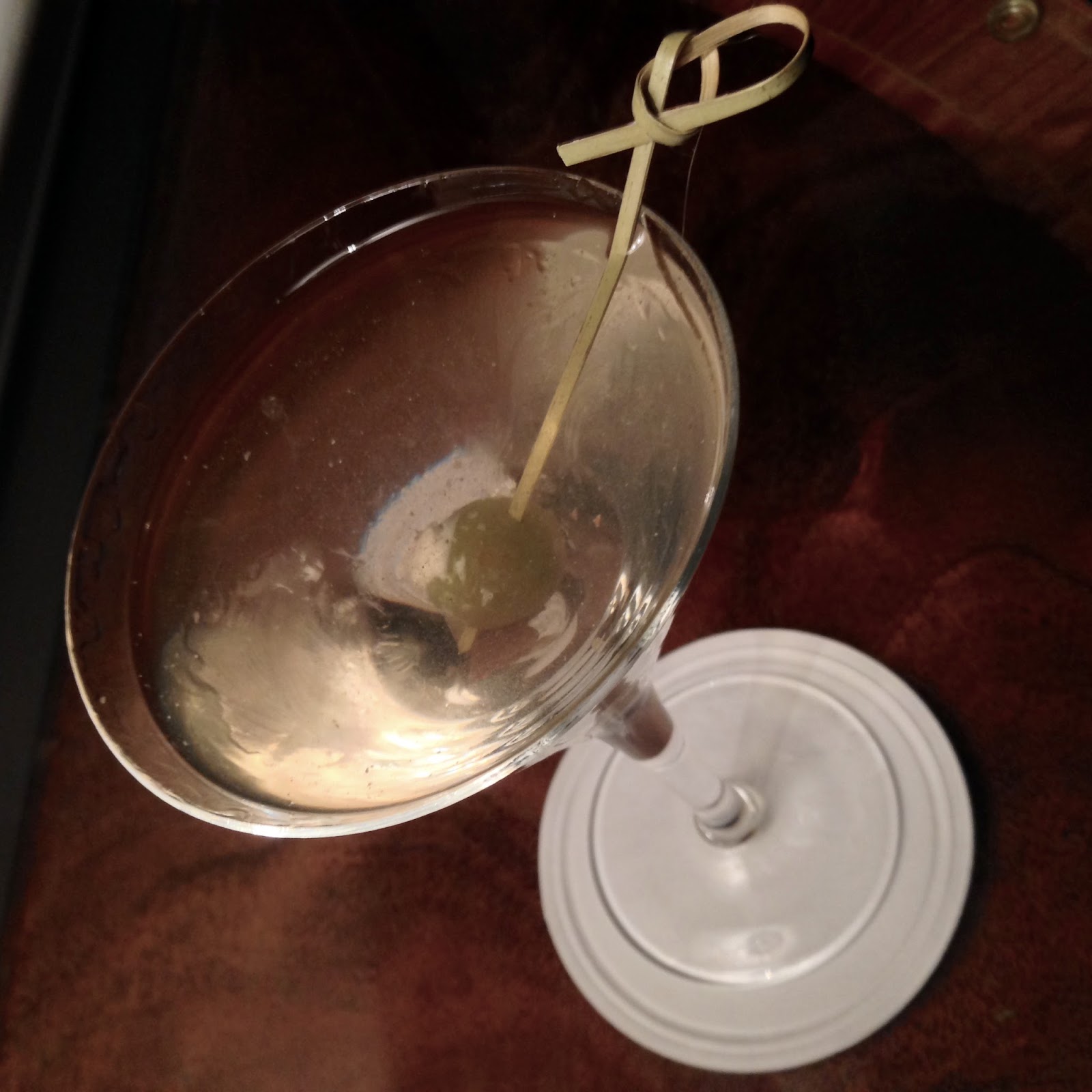 I understand the rationale behind
the current fad for “dry January” but thank goodness we are nearly at its end as temperance fundamentally makes absolutely no-one happy.  Not the person abstaining and certainly not
the people around them because the ascetic is generally as miserable as sin.
Social plans are ruined because one of the group isn’t drinking and doesn’t
want to go to a cocktail bar. Bring into the equation the myriad of diets being
touted around and eating out is off the agenda too which is a crying shame when,
for once, you can actually get table reservations in most London restaurants.

January can be depressing enough without depriving
yourself of all that is good in life. Thankfully I have had a couple of friends who were totally on board with this and my January 2016 has been a riot of food and drink.

A quest for the ultimate antithesis to all this financial,
spiritual and physical abnegation led us to Mayfair.  Not only to Mayfair, but to the home of the
martini; Dukes. Dukes has been on my
hitlist for a very long time.

We managed to get lost somewhere around St James and the
delightful Ritz doorman gave us a stream of “left, then right, then second right, then left” type instructions
that caused a level of confusion that could only be fixed by a stiff drink. It
was therefore with some relief that a few minutes later we turned yet another
corner into the twinkling, safe haven of a cul-de-sac that is Dukes. Hidden
away but eminently accessible, it is like entering another world where nothing
is too much trouble. 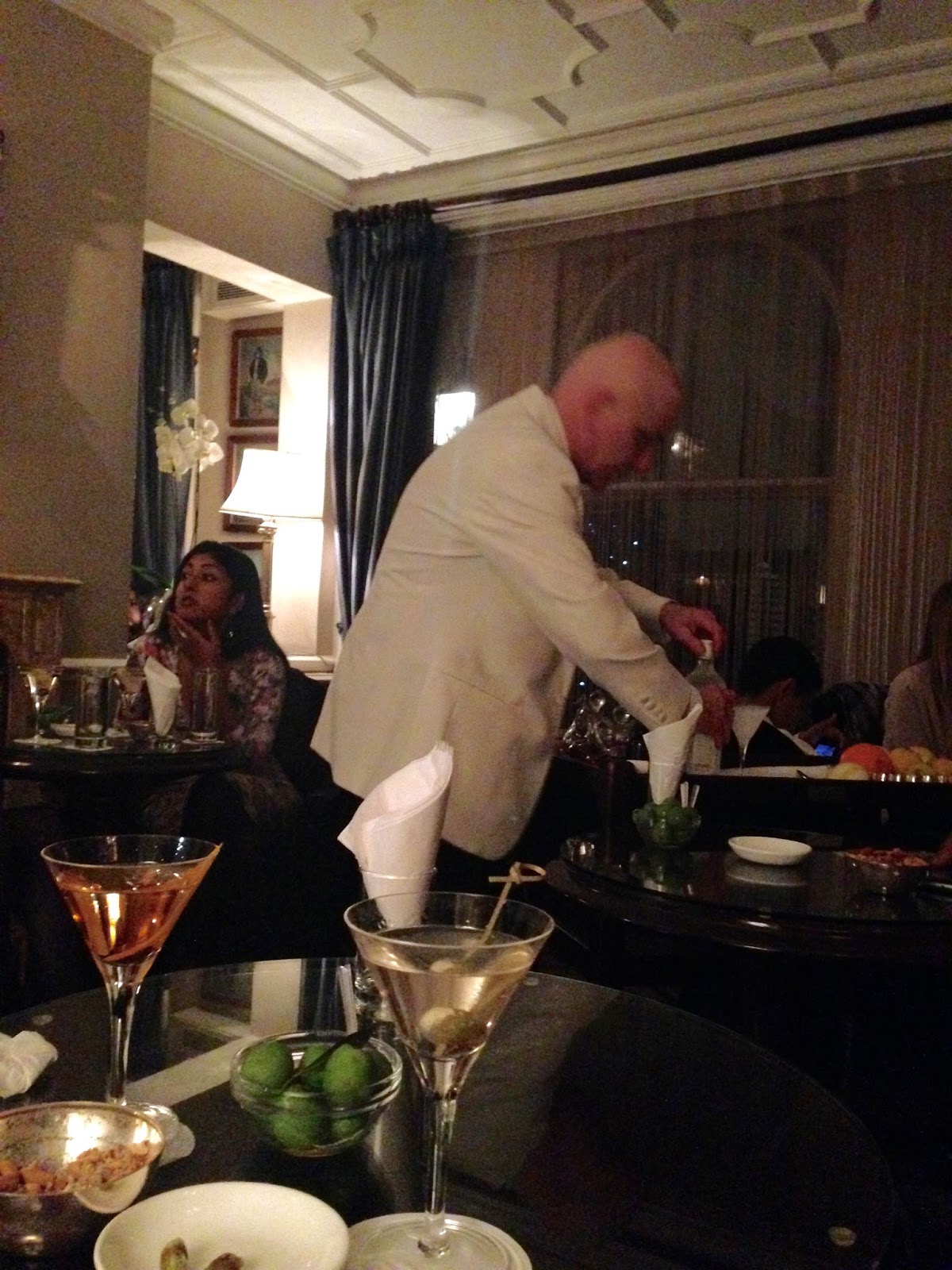 The bar area is small but very inviting. Dimly lit of course; lighting comes
mainly from table lamps and, with the exception of the bar stools, seats are
all of the low and squishy armchair variety. Oil paintings of someone’s ancestors look away discreetly from the antics below, gazing somewhere into the middle distance, This is all utterly conducive to the cinq-a-sept couples whispering in corners and business deals being struck over “hard liquor”. In fact, it’s all very Bondesque which is rather convenient for a bar that claims to be where Fleming invented his hero’s iconic line “shaken, not stirred”. How tired head barman Alessandro Palazzi must become of wannabe Bonds demanding it resolutely across the bar.

That said Dukes does play heavily on its James Bond connections. At
the entry to the bar is a signed Sean Connery photo and many of the cocktails
listed are named for Fleming or for his characters and why not? It all adds to the fun. 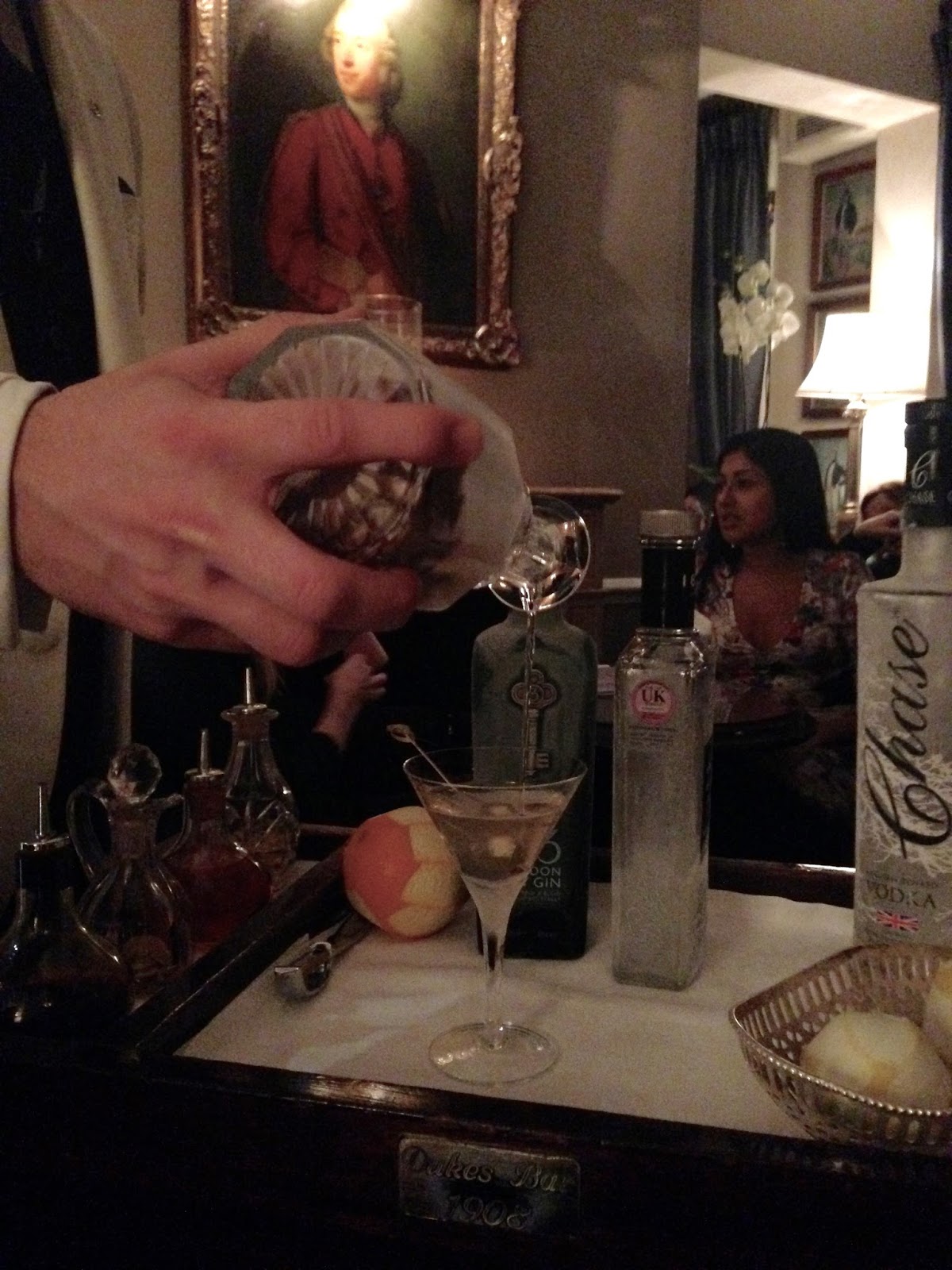 The majority of martinis are around the £18.50 mark.
Pricey by anyone’s estimation until you work out how much booze has gone into
each one. Of course you are also paying for the beautiful surroundings and
service but you do get a lot of bang for your buck.


The white jacketed, Italian staff are all masters of their craft and always willing to spin a tale whilst your drink is prepared in front of you. For the martini novice they will guide you gently through the list with ease.

Glasses are misted with a layer of ice and bottles are straight from the freezer onto the original Duke’s 1908 trolley. First up a classic Vesper, albeit slightly amended from Bond’s recipe in Casino Royale. Gordon’s gin has been superseded by No 3 from nearby Berry Bros and the slice of lemon peel is replaced by a dash of orange oil which sits on the surface exuding a sweet aroma that belies the sharp punch of alcohol below. The dash of Lillet remains the same, however, and the result is a smooth pick me up with the benefit of a hint of sweetness. There is nothing sweet about our second choice, the white truffle martini. Due to the weeks needed to infuse the truffle into the vodka, it is limited in quantity and therefore not on the menu but known by
reputation. Truffles are sourced from Alba and steeped in vodka. The resulting liquor is then mixed into a glass at your table with Chase
British vodka and a dash of dry Sacred Distillery Vermouth before a truffled cheese stuffed olive is
added as the final flourish. It is eminently savoury with a surprisingly delicate truffle flavour until you reach the olive which it is recommended you leave until the end. Understandable as it is a flavour bomb that would overpower everything else.

When you consider the supplement that most restaurants whack
on for anything truffle based, an extra £6.50 is, frankly, not horrific. 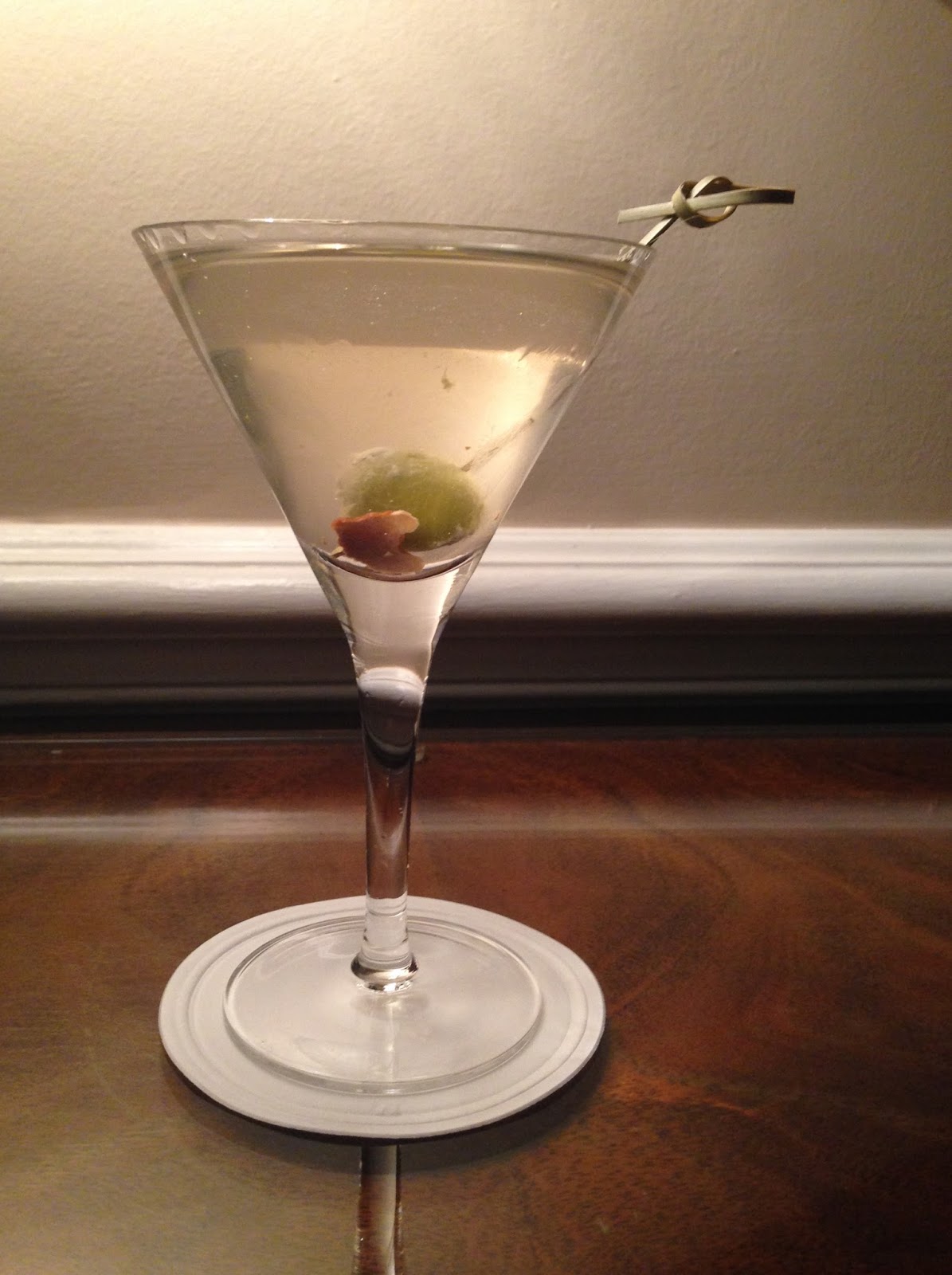 The clientele is mixed and makes for a lot of people
watching fun if that is your bag. Unusual dynamics of tall, beautiful women and
short (rich?) men. The bar sets a limit of two martinis per person unless they
know your alcohol capacities well and it’s clear to see why.
One female guest in a black Alaia-style off the shoulder bodycon dress was
rather the worse for wear. In her quest to reach the lavatories, her platform stilettos were causing
challenges reminiscent of Bambi on ice whilst the elastic bandages of her dress were
just about holding it all together. All before 8pm.

The majority of the other imbibers were much more sedate.
With the exception of one of two intrusive ringtones, the general atmosphere
was one of hushed whisperings. One thing many of the evening’s drinkers have in common is
that they speak Italian and are known to the staff who greet them like long
lost friends. Despite the lofty price tag, this is a place people return to again and again. 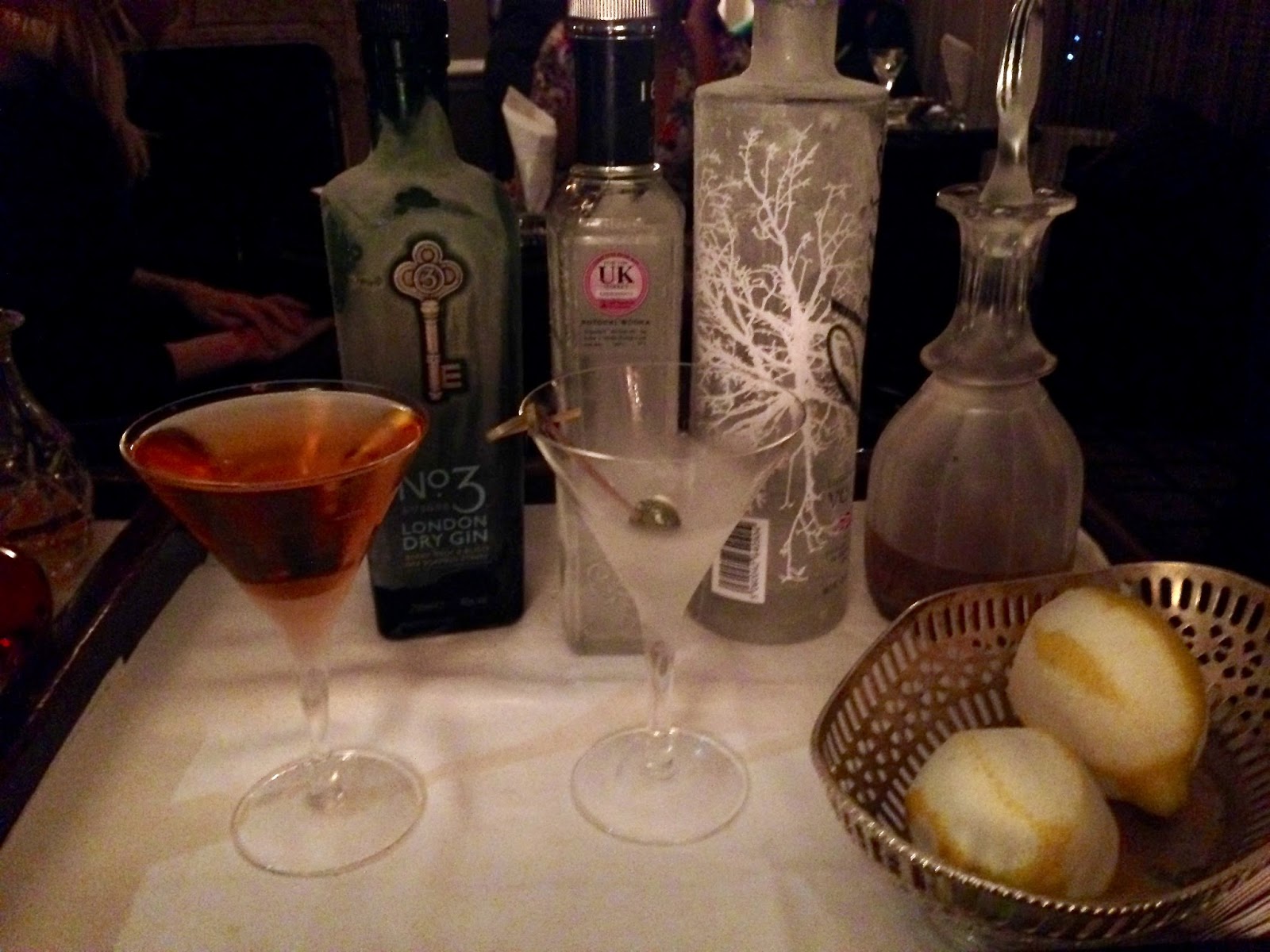 The challenge however is getting
through it. We’ve become so used these days to “martinis” in bars consisting of
vodka topped up with juice or other lower alcohol spirits that a true martini shakes
your teeth and slaps you round the face. How on earth fifties films stars and
Man Men style businessmen had them for lunch and carried on through the day is
completely beyond me. My capacity for drink is not insignificant but I would be
out for the count all afternoon after one as a preprandial. A bowl of nuts and plate of giant olives keep you going nicely but after only one cocktail its necessary to stagger out from the warm cocoon of the bar into the chilly bite of the night  to find sustenance.