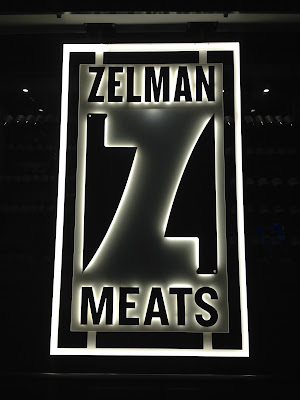 A cold, rainy night in central London. Wandering through Soho, we wanted good quality, comforting food without the need to queue in the street or be
turned away from venue after venue. Or in other words; meat. In all honesty we were using St Ann’s Court as a cut through to get from Dean Street to Whitcomb when we remembered Zelman Meats. Its hard to ignore as you walk past actually, mainly due to the neon sign glowing like a homing beacon to steak lovers.

As you may know I was a big fan of Rex & Mariano – the
previous inhabitant of what is, at best, a dubiously located and huge site down
a dodgy alley with little passing trade.   I truly hope that a
new incarnation of R&M will open elsewhere as it was a breath of fresh air
offering beautiful seafood, in a light, airy (and somewhat cavernous) room with
a large visible kitchen, bar at the back and a seafood bar. The new design for
Zelman (named after Goodman owner Misha Zelman) is the complete opposite. Dark and moody with music selected by local
record shops being pumped out, a large wall now divides the room leaving
the bar separate. Industrial, metal grilling splits the space up further and
red leather banquettes bring to mind the colour of a well-hung steak.  The previously enormous kitchen has been
halved in size but still allows diners the smells and sizzle of their dinner cooking
before them (but not the extent that it makes your blow dry smell bad, ladies…) Speaking of ladies, this is somewhere I would come with a group of girls. None of the machismo that you sometimes find in some branches of Hawksmoor and Goodman- much as I love their food-  and none of the patronising nonsense from other steak purveyors (I’m looking at you STK London with your ridiculous “not your Daddy’s steakhouse” nonsense…) Not a hipster in sight on the staff either. Just a group of very smiley people all keen to act as disciples of good steak. 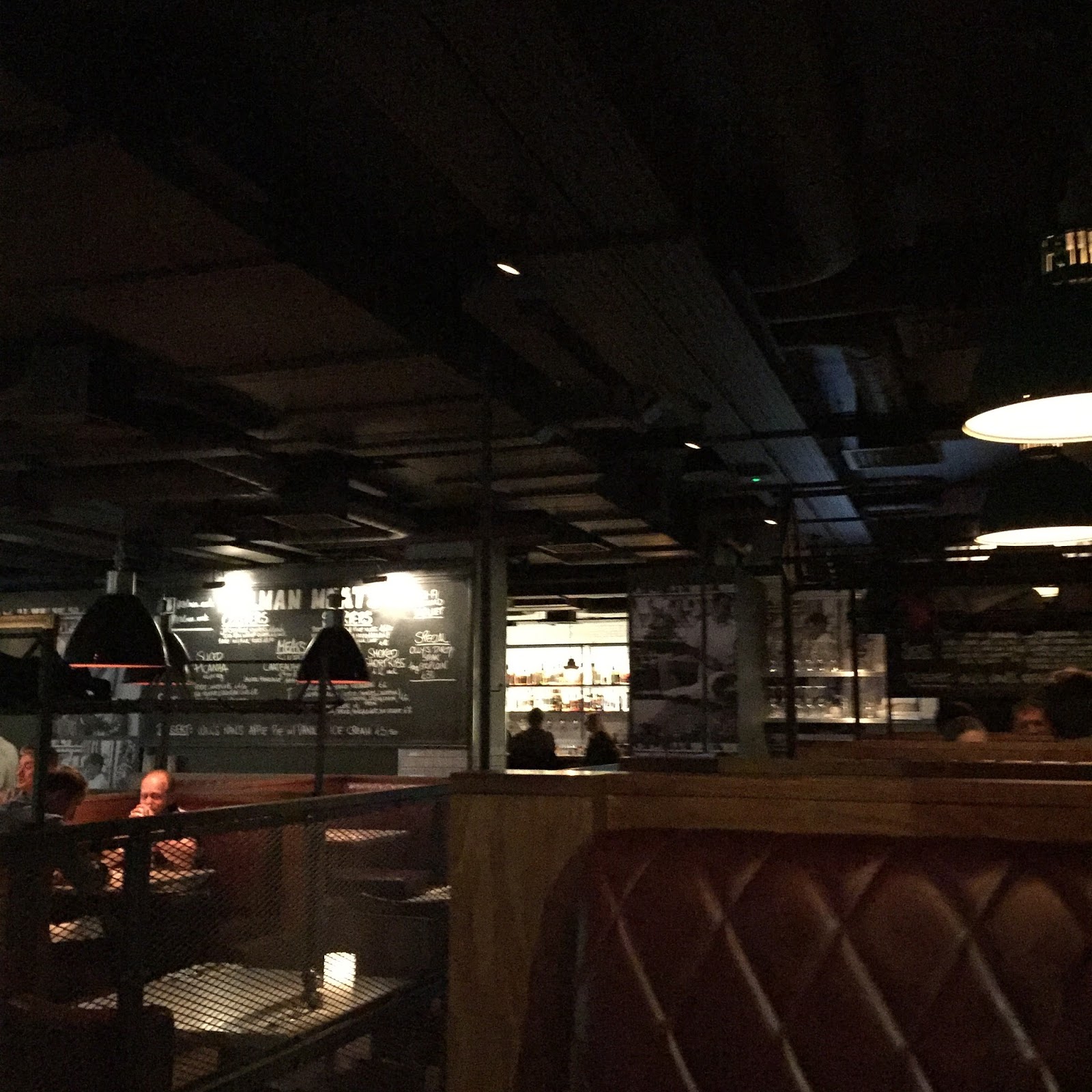 The menu is really quite simple. Mainly oysters on the starter list
with one homage to previous incumbent R&M in the form of red prawn
ceviche. Plus a salad for the sort of people who probably shouldn’t be eating at Zelman at all.  In the main course department
the options are sliced picanha (£6/100g),  sliced chateaubriand (£9/100g) or shortribs (£12 each). There is a minimum order of 200g of any one cut of beef but who wants less than 200g anyway? It was interesting to hear that, being part of the Goodman group, all the meat is sourced from the same suppliers as Beast and Goodman meaning that, despite the much lower price tag you are getting the same quality- after all how many qualities of chateaubriand from one top-end supplier can there be? 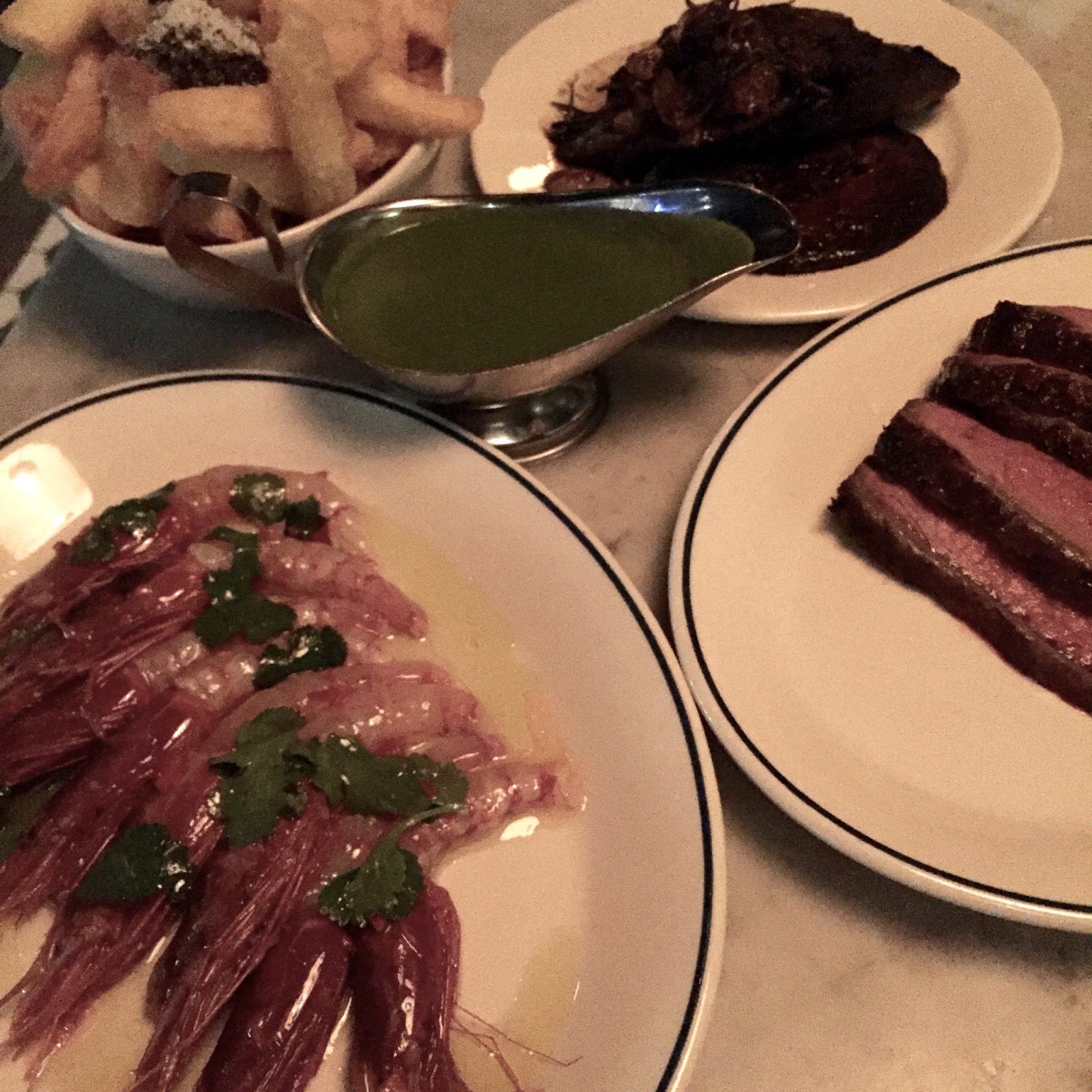 Rex & Mariano has not been entirely obliterated from the venue. Monogrammed plates and water jugs are still making an outing which I quite like. An unapologetic statement that- yes, we tried something else and it didn’t quite work here- now eat some cow. Sauces to accompany the steaks include chimmichurrri, bearnaise or BBQ at a pound each. Having had a decidedly mediocre picanha and chimmichurri at a highly recommended restaurant in Buenos Aires only a couple of weeks before, I had to put Zelman to the test. Could they beat the Argentinians at their own game? 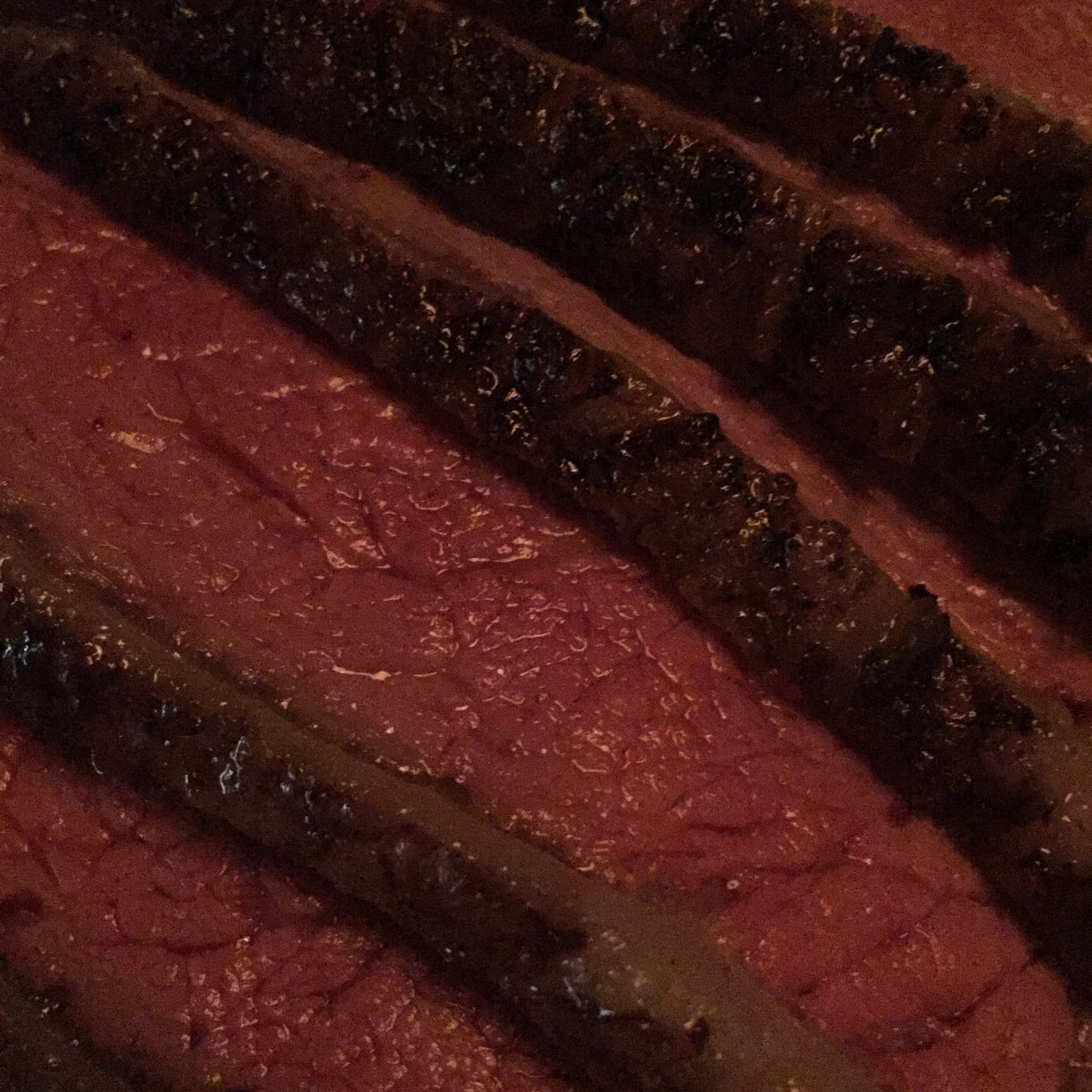 The answer was an unequivocal ‘yes’. The meat was exceptional. Cooked rare with a good crust to it, the inside was as juicy as can be from thin veins of fat molten into the flesh. The chimichurri possessed a little bit of an odd consistency in all honesty, as though someone had received a new blender for Christmas and got a little bit carried away until it reached puree status. I’m used to my chimichurri being chunkier. That said, the flavours were great; vibrant herbs with a vinegar tang.

The wine list naturally focuses more heavily on red than white and Argentina pops up regularly. A glass of Malbec was a good choice at around £8, well-rounded, not too tannic and a good foil for the meat. The wine list is not as cost effective as the food but is nonetheless not cynically priced compared to other Soho neighbours. 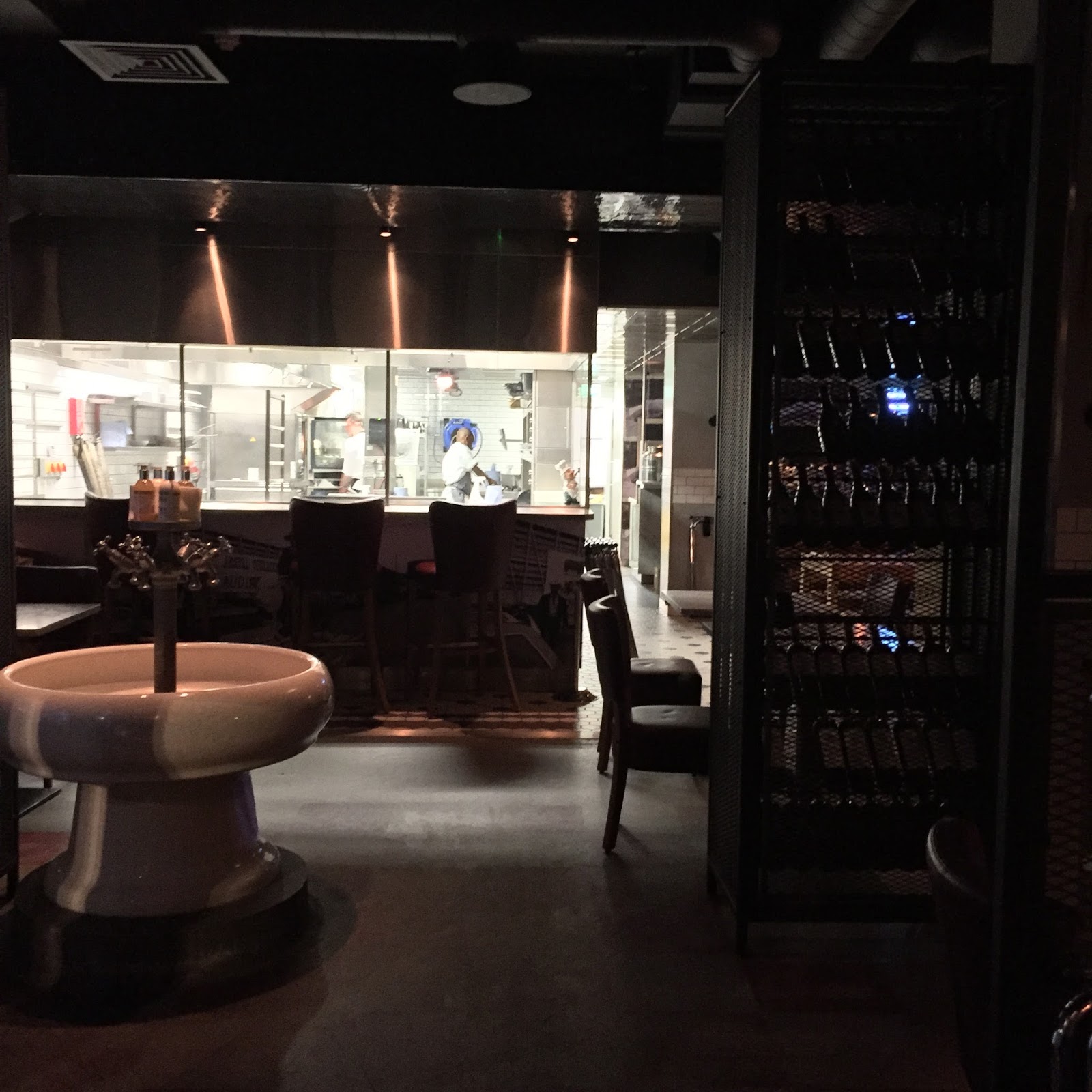 £8 does seem incredibly steep (especially compared to the
steak prices) for a bowl of chips. But as the old M&S advert might say;
these aren’t just any ordinary chips. These are a massive bowl of truffle and
parmesan chips. Crisp outer shells basked with salty parmesan are then
sprinkled with a truffled tapenade sort of a thing before more truffle is shaved on
the top. All in all, truffletastic.  If
you’re not sold on the truffle idea, then its £4.50 for the normal sort of
fries.  I didn’t try these, why would I
when there’s a truffled version on offer? Also sounding delicious was mash with garlic and onion. 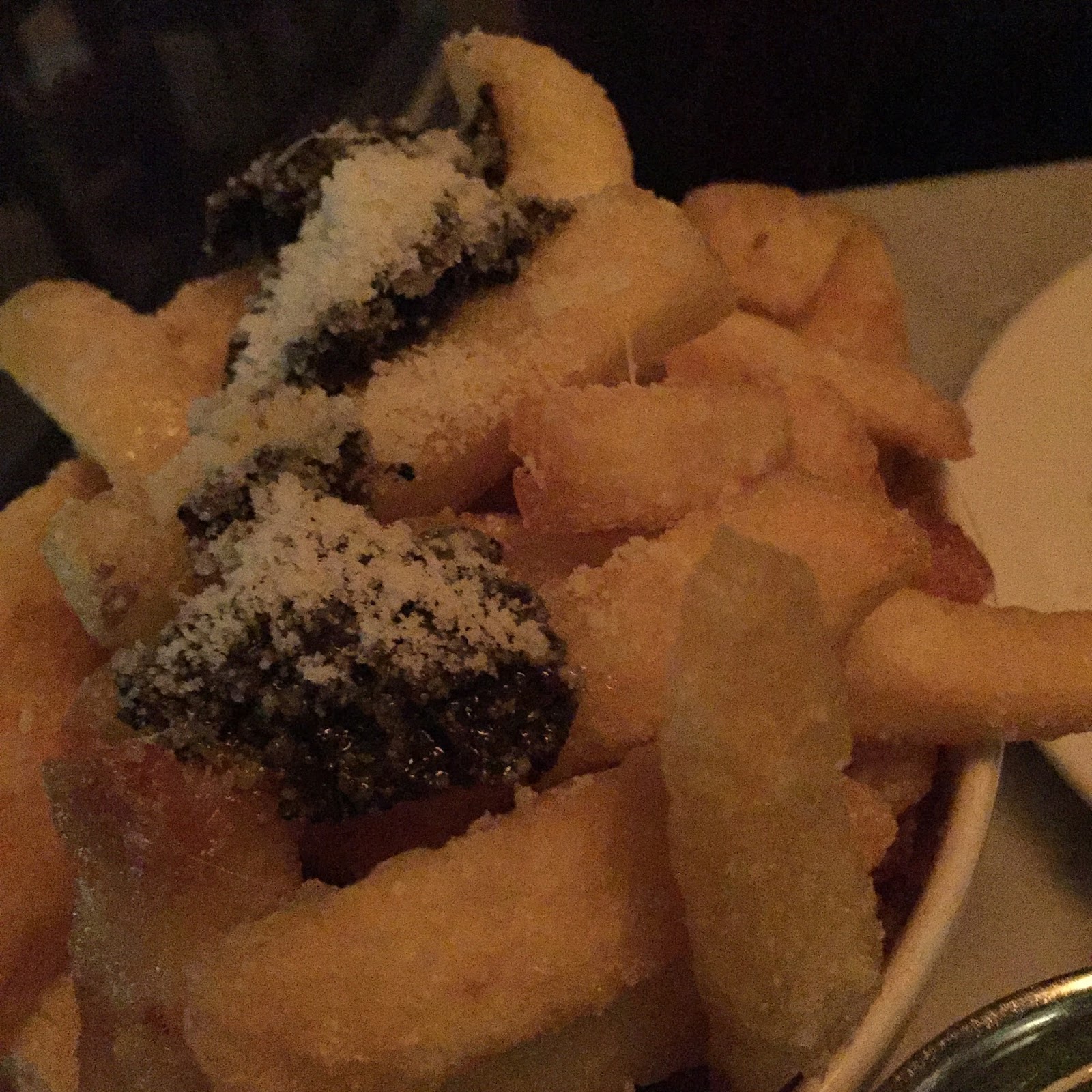 Roast mushrooms are surely just an afterthought of a side
order? One of our group boldly declared these to be the best mushrooms ever tasted and
even proclaimed them to be her favourite part of the whole meal. Quite some
statement when there is prime beef on the table. Roasted with herbs and healthy dose of oil to meaty without being too soggy (nothing worse than a soggy mushroom…)

Should a vegetarian ever venture into Zelman Meats which-
let’s face it- is somewhat unlikely, then the sides are inviting enough including roast cauliflower, hummus & pomegranate and another beetroot/ricotta/pinenut combination that even I would eat.


Puddings are apparently on rotation with one on offer at any time. On
the day of our visit it was “Will’s Mum’s Apple Pie”. Delicious as it sounded,
not a spot of belly space could be found. Next time…..

My only complaint about the whole experience? Trying getting
into and out of one of the – admittedly beautiful- elevated leather banquettes
in a skirt!


Next time I plan on going with a bigger group and ordering virtually the whole menu- I’m particularly desperate to try the shortrib. You can keep the oysters though; weird slimy things- I’ve tried every permutation and will never like them.


In summary: Their website sums it up nicely: “We just cook beef, it’s all we do”. And do it very well indeed if my experience was anything to go by.